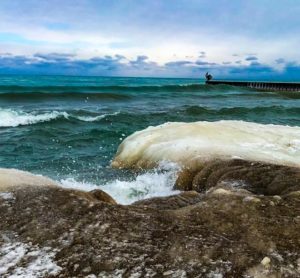 In a key development in the race, Davis picked up two high-profile endorsements.

“I’ve known Cam since he put himself through law school at night at Chicago-Kent College of Law in the late ‘80s. He’s fought for the public’s right to clean water for more than three decades,” said northside U.S. Rep. Jan Schakowsky. “He’s the forward-thinking, progressive fighter for public health that we need today at the Metro Water Reclamation District.”

Former U.S. Ambassador to Canada Bruce Heyman also endorsed Davis. “Cam has been a tireless public servant for clean water,” said Heyman. “Together we worked with Canada to make the Great Lakes healthier for tens of millions of citizens.”

The Metro Water Rec District service area covers 881 square miles, including Chicago and 128 surrounding communities in almost all of Cook County. It serves upwards of 10 million people. Its mission is to protect public health and safety related to the waterways in its service area.

Davis accompanied the announcement with the launch of an online campaign, http://www.crowdpac.com/c/camdavis.